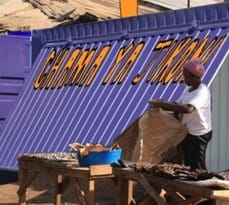 A team of MBA students from Cambridge Judge Business School are competing in the Hult Global Case Challenge to win the Hult Prize, a start-up accelerator for social entrepreneurship. The team members include: Emily Tabak, Fiona Brenner, Graham Schwikkard, Nate Lowbeer-Lewis and Beth Holmes. After finishing second out of 50 teams at the Hult Prize Regional finals in London, they decided to enter the online competition, aiming to get to the final round and win $1 million in working start up capital.

The team’s idea is a social enterprise that harnesses existing social networks to solve food insecurity in urban slums and they’ve given it the name of Chama ya Jikoni, which means ‘group kitchen’ in Swahili. Chama kitchens are self-sustaining micro-franchises owned by women who already save together in groups called Chamas and these groups of women exist all over the world. In addition to being a place to cook, a Chama Kitchen – Chama ya Jikoni provides these women with working capital to buy food in bulk, enabling them to make and sell cheap, healthy food that is tailored to local tastes.

The team has received support from NGO’s including Church World Service and private businesses including: Google, McKinsey, and Ernest & Young.

Listen to the podcast on SoundCloud