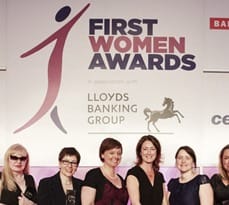 The search is now on to discover and celebrate Britain’s female role models at the 2013 First Women Awards. Created in 2005 by the CBI and Real Business, the First Women Awards aim to recognise women who are trailblazers, pushing the boundaries in business and enhancing our organisations.

Dr Shima Barakat is CfEL’s Research & Teaching Fellow, and will join the panel of judges for the awards.

The awards provide a showcase for pioneering women in any industry sector, as well as establishing a supportive network which can inspire future groundbreakers. CfEL has been developing research and specific programmes aimed at female entrepreneurs so we understand how important these platforms for celebrating female leaders and their achievements are in enabling other women to see their own potential. We’re delighted to be supporting these awards.”

It’s encouraging that the number of women in senior positions in UK companies have increased during the last year. The challenge now is to keep this momentum going. The CBI is proud to support the First Women Awards which showcase the achievements of female leaders and create positive role models for other aspiring women.”

Nominations can be made in a range of industry categories, as well as First Women Business of the Year and Lifetime Achievement. Matthew Rock, Co-Founder of Real Business, said:

We’re very proud to have established these awards as a hub for pioneering exciting women. Over eight years, we have established a platform and mutually supportive network for remarkable and fearless women. From engineering to media from science to retail, we are proud to have created a programme with no boundaries.”

The closing date for entries is Friday 5 April 2013, with the awards ceremony taking
place at the London Marriott Hotel, Grosvenor Square on Wednesday 12 June 2013, hosted by broadcaster and sports presenter Clare Balding.

Find out more about the Entrepreneurship Centre