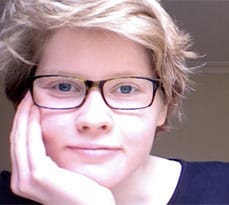 Alice and her team members have won $5000 to take forward their ground-breaking project to commercialise a novel idea developed by the US National Cancer Institute to copy how viruses work in human cells as a versatile delivery method for cancer therapies.

Current chemotherapy methods are poor at hitting specific cancer targets within cells and are also highly toxic. The US NCI team are pioneering an emerging technology of protein transduction that delivers proteins into human cells by exploiting the ability of certain proteins to penetrate the cell membrane.

Since viruses have a unique ability to infect cells, the team are working on two new technologies to deliver treatments via virus-like particles. Alice’s team’s company (Riband 557) have developed a financing strategy based on impact investment for this method of treatment, with the ultimate aim of establishing an open innovation platform and technology pool to increase the scope of applications of the technology to other cancers and diseases.
Riband 557’s $5000 award from US organisations The Center for Advancing Innovation, the Avon Foundation for Women, and National Cancer Institute will allow them to take their business to the next phase. They will also be introduced to venture capitalists and funding bodies to seek further seed funding.
Alice now works as a Research Associate at Accenture’s Institute for High Performance. She said:

When it comes to cancer, everyone has the same goal: we want to cure it. But the traditional IP-driven model (which means that companies can earn money by licensing IP to other firms) has become unsustainable – and some feel potentially morally suspect. New paths to accelerate the commercialisation of high-impact, but underfunded, innovations must be found. Our open innovation approach, where IP is shared to partners to maximise the benefits of the technology developed, along with impact investment, offers this new path for the benefit of everyone.

The Centre for Entrepreneurial Learning at CJBS is an official collaborator with the competition and the team has been supported throughout by Entrepreneurs in Residence Alan Barrell and Miranda Weston-Smith, and the Cambridge University Student Consulting Group who brought the team together. Alice’s fellow team members are students from the University of Cambridge and Anglia Ruskin University:

A second Cambridge team – Grecia Gonzalez, Nikolaus Wenzl, Alasdair Thong, Hind Kraytem and Tim Xu – also won a Startup Challenge award for their project focusing on early stage cancer. They are working to develop a tool that can make the distinction between early stage cancer and invasive subtypes, which require more careful and aggressive treatment.

The competition is the largest business plan challenge in the world and the two Cambridge teams have been competing against universities such as Princeton, Harvard and Stanford, as well as universities in New Zealand and the Netherlands.