Four Cambridge MBA students are announced as runners up at the A.T. Kearney Global Prize Competition 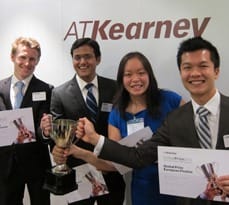 Four MBA students at Cambridge Judge Business School were chosen as runners up at the A.T. Kearney Global Prize Competition European Final in London, which took place in London on Friday 9 November.

Alice Leung, Graham Schwikkard, Tejasvi Bhat and Wee Lee Sim, all in the current Cambridge MBA class, represented Team Lwazi and competed against other MBA students by working as members of a management consulting team and tackling a case based on an actual A.T. Kearney client engagement. Throughout the competition, the team has the opportunity to interact with A.T. Kearney consultants as they act as the client in simulations, provide feedback on their efforts and share their insights on consulting.

The A.T. Kearney Global Prize competition was a great way to get a glimpse of the consulting life by allowing us to work on a real life business case under the simulated environment of tight deadlines and insufficient information that really challenged our analytical and presentation skills.

This experience has enhanced my learning through allowing me to apply some of the business knowledge that I’ve gained in class as well as receiving specific feedback from the expert judging panels and coaches along the process. I’ve also learned tremendously from my team mates who have international backgrounds and experiences that speak to the diversity of Cambridge Judge Business School.”

The case competition is a great opportunity that works with the Cambridge MBA programme for three main reasons; you get a chance to apply your learnings from the lectures (e.g. NPV calculations) very early on and get great feedback from experienced consultants on your thoughts and presentation skills; you have to quickly adapt to a new group setting and figure out new ways of working effectively which can be transplanted to the CVP (Cambridge Venture Project) group; and finally anyone who is interested in consulting gets a brief introduction to what it actually is like to be a consultant.

As well as that, you get the opportunity to network with students from other European MBA programmes, have good fun and a great night out in London!”

The ATK competition was a great opportunity to work on a consulting case and learn that there is often no single answer to a business issue.

I heard about the A.T. Kearney competition even before I started the MBA programme. Many of the MBA students I spoke to from previous years highlighted this as a defining project in the Michaelmas Term and I decided early on that this was something I would commit to. The case for this year’s competition was based on a French company in the express parcel delivery market which was not a sector that anyone in our team were familiarity with. We buckled down to study the case and put in a lot of time discussing and planning our key findings and messages. We were surprised to be picked to represent Cambridge Judge Business School at the European Finals and even more surprised when we placed second in Europe. The biggest takeaway I received from this competition was the things I learned from my team members (e.g. creativity, clarity, commitment) and how to work under pressure, especially in a situation when you have a panel of judges in front of you asking very difficult questions!”